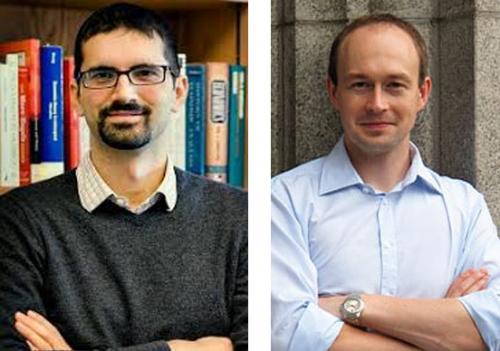 The Georg Walter Leitner Program in International and Comparative Political Economy at the MacMillan Center hosted its 6th Annual Formal Theory & Comparative Politics Conference on September 14-15. Professors of Political Science Alexandre Debs and Milan Svolik organized the conference and it was sponsored by the Edward J. and Dorothy Clarke Kempf Memorial Fund and the Leitner Program.

Each year, this conference aims to bring together scholars at the intersection of comparative politics and formal theory to enhance our understanding of world politics. This year’s attendees offered expertise in a wide array of substantive topics and world regions, and participated in productive conversations about central questions in global politics today. What causes a country to adopt or abandon democracy? How does a dictator’s repression affect the likelihood of a revolution? What role do governments play in curbing or reinforcing violence among traffickers of illegal goods and services? What are the redistributive consequences of social discrimination? How does social media affect protests and policy-making? These questions are just a few among many that participants considered over the weekend. The full conference program, along with paper abstracts, is available at the conference website.

The first panel, on regime stability, included papers on both democratization and transitions to authoritarianism. Scott Abramson and Sergio Montero modeled democratization as a learning process, whereby the empirical correlation between democracy and economic growth in one’s own country and neighboring countries affect elites’ beliefs about their likelihood of retaining power in the future. This influences elites’ support for regime change. One key implication of the model is that a large enough economic shock (similar to the size of the Great Depression) would cause reversals to authoritarianism.

On the topic of authoritarian reversals, Monika Nalepa, Georg Vanberg, and Caterina Chiopris  show that polarization among both citizens and elites plays a central role in authoritarian backsliding. Previous work in this literature has argued that citizens in polarized societies may accept authoritarian tendencies within their preferred party because they are so ideologically opposed to the alternatives. The authors challenge this assertion, arguing that voters may regret their electoral choices when governments reveal themselves to be “closet autocrats.”

Later in the day, the conversation turned to public protests. Marco Battaglini, Rebecca Morton, and Eleonora Patacchini studied the informational role of protests, combining a formal model with experimental data. Their theory frames protests as an opportunity for citizens to aggregate information and send useful signals to policymakers. Social media serves an important role in this process: it not only facilitates coordinated action, but also facilitates the information-sharing that leads to more informative protests and effective policy change.

Saturday’s discussions opened with a panel on the economic dynamics of black market activities. The presenters examined the unintended consequences of government intervention in illicit markets such as the drug trade. Juan Camillo Castillo and Dorothy Kronick modeled drug traffickers’ decisions to either agree to a peaceful division of profits or pursue violence. Using data from prohibition-era United States and modern-day Mexico, they show that when governments enforce prohibition, profits rise and drug traffickers are more likely to pursue violence. Brendan Cooley, Colin Krainin, and Kristopher Ramsay highlighted two distinctive characteristics of illicit markets that are key to understanding the proliferation of violence. Sellers lack legal protections if buyers steal their product and they may be punished for attempts to sell. These characteristics, the authors argue, underlie the violence-generating effect of prohibition enforcement.

The final panel, “Publishing Formal Models in Comparative Politics,” featured a discussion with current and former editors of journals publishing formal theory work. The panel participants discussed the challenges formal theorists must overcome to publish their work in general interest journals and strategies for reaching a broader audience. John Huber, former editor of the Quarterly Journal of Political Science, highlighted the importance of working to “integrate what we do with the substantive themes that are animating our subfield.” In a similar vein, current editor of Economics and Politics B. Peter Rosendorff advised that “every theory paper must begin and end with a real world observation.”